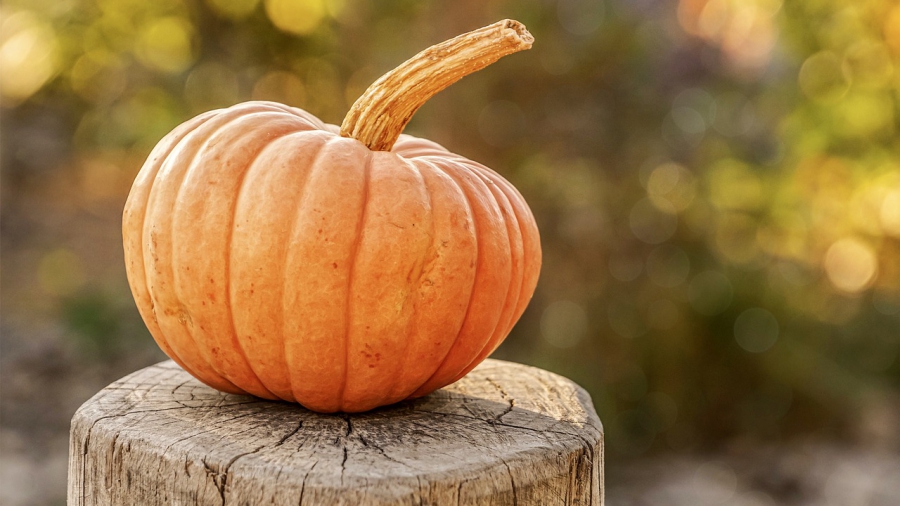 History books tell us that the Native Americans brought pumpkins as gifts to the first Thanks-giving at Plymouth Rock; but pumpkin pie, as we know it, was probably not on the menu. Early Pilgrim recipes called for whole baked pumpkin stuffed with the wild apples and cranberries of the region. The northeastern Native Americans taught the colonists many uses for the ubiquitous pumpkin. It became one of the foods that sustained them during the early, difficult years in the New World.

The Pilgrims were fond of meat pies – common dishes in their native England. They also loved the spices – cinnamon, nutmeg, cloves, ginger, and salt – that they were accustomed to in their homeland. So when the colonies became affluent enough to begin trading with other countries, spices were one of the first things they imported. Though we don’t really know, we can guess that it was at that point in history when the pumpkin and the Pilgrims’ love of pies came together and an American tradition was born!

In this country we use the pumpkin largely for pies and other desserts, but in various countries around the world it is used in savory dishes as well. Curried pumpkin is often served in Thailand. Spicy pumpkin-based soups are common in the West Indies. Pumpkin is often paired with beans throughout South and Central America. And if you visited a local vegetable market in central Europe or southern Spain, a chunk of pumpkin might be included in the soup greens you purchased.

Pumpkin is a highly nutritious food deserving of more culinary attention. It contains over 52,000 International Units of vitamin A per cup and is a good source of minerals and fiber. It has some very desirable cooking properties, as you will see in the recipes that follow. Best of all, you don’t even need a fairy godmother to transform the versatile pumpkin into a variety of delectable dishes.

PURCHASING: It’s best not to buy pumpkins that resemble Cinderella’s coach or a perfect jack-o-lantern. These are called field pumpkins. They are edible but are not the best choice. Pumpkin varieties grown specifically for cooking are called “pie” or “sugar” pumpkins. They have a smaller seed cavity, more flesh, and are less stringy. Your natural foods grocer or local vegetable market will most likely have the best selection. It is easy to recognize them because they are smaller, heavier, and have thicker stems.

STORAGE: The pumpkin stores well for up to five months if kept in a cool dry place or root cellar. Pumpkin puree freezes well. If pumpkin is not available, winter squash will substitute in most recipes.

PREPARATION: Preparing pumpkin is very simple. Try making enough to use and some to freeze. Preheat oven to 350 degrees. Cut pumpkin in half and wash. Scrape out seeds and thready pulp. Bake skin-side-up on a cookie sheet or cake pan until pumpkin is tender enough to pierce with a fork – about 45 minutes. To keep pumpkin from drying out, cover loosely with foil or use a cake pan fitted with a wire rack and add a small amount of water. Cool and peel skin off with a paring knife. To puree use a food processor or a potato masher. One pound of pumpkin will yield about one cup of puree.

This recipe and the ones following ask you to peel raw pumpkin. Sounds intimidating! Actually, I found it to be quite easy. Simply cut off a portion of pumpkin that is easy to hold in your hand and peel the skin with a sharp paring knife.

This dish is quick to prepare.

In a large non-stick frying pan, add the broth, soy sauce, apple juice, onions, pumpkin, and pepper. Bring mixture to a boil, cover, and reduce heat. Simmer for 10-12 minutes. Add salt if you prefer and garnish with green onions.

CREAM OF TOMATO AND PUMPKIN SOUP

The pureed pumpkin in this soup lends such a rich, smooth texture that it’s nearly impossible to tell there is no cream in it. The radiant color makes it a beautiful first course for any holiday feast. (And it tastes great!!)

Having guests for Thanksgiving? This dramatic main dish was a hit with all my guests last year, even the ones who were not vegetarian.

Written by: Patti A. Bess – a freelance writer from Grass Valley, California.

Article from the Vegetarian Resource Group